The members of the Brussels Writers’ Circle are a varied bunch. Prose writers, poets, playwrights, memoirists, screenwriters and bringers of silly bits and pieces, we sweep in from all different occupations and locations twice a week to share our scrawlings with one another.

In ‘Meet the Circle’, we introduce you to some of our members, hopefully providing an insight into who we are, what we do, and what we think about butterflies. Well, maybe not that last bit. This week we will hear from Océan Smets, a poet turned science fiction writer with a special interest in language and human psychology.

Océan is a published author of poems, flash fiction and nonfiction. He’s the winner of 2015 Spanish 1st International poetry competition Writing Verses, the 2014 winner of  the First Literary Contest of Short Tales for Train Travelers by Thalys Kemkem, Argentina.

When did you join the group?
In February 2014, when I moved to Brussels. I read an invitation to join the Brussels Writers Circle in an English Magazine for expats. I directly emailed to enroll. Destiny?

What were your first impressions of the group?
What first struck me was the variety of styles among us, together with the ability to fold into other writers’ thoughts and be their editors. Our group , from all over the world, has been constantly renewing with pens. It’s so enriching!

What have you published so far?
Articles (non fiction), poems and short stories. I can’t stop writing “magic realism”. I am sort of hooked. Yet I would like to jump from there into something more consistent, diametrically opposite.

What are you currently working on?
I am currently working on my second social sci-fi novel. I dream it. I can see its inhabitants in my nocturnal visions. I really can feel the touch of my characters at night. They are my imaginary friends. So I am never alone. 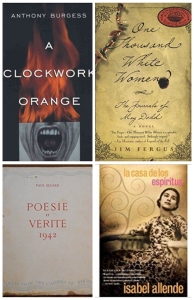 Who are your biggest literary influences?
Bashö’s haiku, Paul Éluard, Isabel Allende, impacting films like Clockwork Orange, and especially all the gender literature from my studies.

How have they influenced you?
My writing has been influenced by all these factors, so we can say I am a cross between a human and a beast. Well, rather a magical mutant.

Do you have a memorable moment from the BWC that you could share?
Yes. The day Antoinette gave me the title for my novel in three seconds.
“What is your novel about?”
“A little wheel inserted in your body that sends you love and you have orgasms”.
“It’s Wheelgasm!”

What do you get out of the group?
I mainly get a shower both of reality and humbleness whenever I read for it. As a writer, I tend to live in my magical world. English isn’t my mother language so I really need editors. Reading for the group also makes me write more. There is always somebody who likes my stories so I am also encouraged. I can see my lines published in an anthology. This gives my life meaning.