You loved the fifth annual BWC Writers’ Retreat back in May so much that, to insistent demand, a follow-up is being organised this December. And now, registrations for the December Retreat are open!

“It’s my great pleasure to finally announce the start of the registration for our second Writer’s Retreat 2015.

The retreat will take place from Friday 4 December to Sunday 6 December at, Siddharta in Tremelo. The price, will be the same as in May i.e. €75 – which includes your bed and all your meals.

The venue exists of 2 buildings with 17 rooms in total. In principle, this means that we can accept a minimum of 17 participants, but should you not mind sharing a room (see registration), we can allow more people to join the retreat as a number of the rooms contain 2 beds.

Please register through this link.

Please note that places will be appointed based on a First-Come-First-Served basis. Once you have registered, I will contact you with payment details. Your place will be reserved once payment has been received.

For those of you interested to help out in the organisation and planning of the content, which we will base on the numerous responses we had our previous survey, please contact me at: hamedmobasser@gmail.com

Looking forward to hearing from you.” 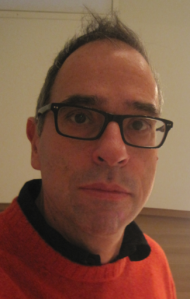 Warning: this man is dangerous around bacon

The members of the Brussels Writers’ Circle are a varied bunch. Prose writers, poets, playwrights, memoirists, screenwriters and bringers of silly bits and pieces, we sweep in from all different occupations and locations twice a week to share our scrawlings with one another.

In ‘Meet the Circle’, we introduce you to some of our members, hopefully providing an insight into who we are, what we do, and what we think about Greco-Roman wrestling. Well, maybe not that last bit.

This week we will hear from Kevin Dwyer who has been living in Belgium since 1988 and has been actively writing fiction since about 1995, initially as a form of procrastination while doing his doctoral research on food and film. He teaches American Studies at the Université d’Artois in northern France. He has also been busy ably chairing the BWC’s Thursday evening meetings since the start of this year.

When did you join the group?

I first inquired and joined the BWC mailing list via this fine blog in the summer of 2013 and attended my first actual Circle meeting at the (now defunct) Falstaff venue the following September.

What were your first impressions of the group?

Coming to join a group of strangers is not an easy thing to do, and even more so in this case as it represented for me a public “coming out” as a writer. Up to that point only a few of my friends and acquaintances knew about my writing activity. I approached the meeting with much trepidation, but soon found a group of generally friendly, and at times quirky, people who were truly interested in the writing process, and who were eager to discuss and offer advice about my writing projects. One thing that never ceases to amaze me, and this remains true for new members who are continually joining, is the high level of almost palpable intelligence and acumen emanating from the group.

I read my first piece to the group a few weeks later, with shaky voice and trembling hand. I sipped my beer with much foreboding, watching my document get thoroughly scribbled over by those around the table, but I was quickly comforted and encouraged by the reactions. Members are for the most part generous and kind with their remarks. Some claim that we are too nice to each other and would prefer more tough love, but I think it is better to err on the side of kindness, and take what you can from the comments.

What are you currently working on?

After a few months of attending meetings and occasionally reading out stories that I had already written, I finally committed to writing a novel based on my interest in food and eating, on which I have already published quite a bit of non-fiction. My story takes place mainly in the present-to-near future and deals with the relationship between a brother and a sister who are evolving in a society where being overweight and eating fat have become taboo. The current working title is “Bodily States” and it amounts to a critique of current attitudes to food, eating and body perception, and includes bodies smeared with Nutella and Lucky Charms, fasting women in hanging cages, and sex with bacon! I do not quite have a complete first draft yet, but I am getting there, thanks in large part to the motivation and encouragement provided by the group.

Who are your biggest literary influences? How have they influenced you?

I’m afraid to say that my taste in “literature” does not include many of the classics, and I find myself reading a lot of popular fiction, history and biographies, mainly of Hollywood film stars. If I am trying to emulate any writers or style of writing, I would have to mention Philip K. Dick, J.G. Ballard, and Edgar Allen Poe, when I’m feeling pretentious.

Do you have a memorable moment from the BWC that you could share?

I suppose that the most memorable moments involve unexpected happenings. During one quite ordinary session, the waiters started bringing us surprising quantities of food and drink. While we tried to stammer out that there must be some mistake, they insisted that there was plenty more on the way. Little did we know that one of the people in the group had the idea of turning the writers’ meeting into a birthday party! We all gladly obliged, and managed to carry on proceedings at the same time, although the usual meeting protocol was thrown to the wind. We straggled out at midnight onto the mundane Brussels street, all the happier for the surprising evening of creativity and fun. I have since been to a number of parties thrown by Circle members, and they certainly know how to do it!

What do you get out of the group?

Much more than I ever expected, especially from a social point of view, but it really comes down to the writing, and it is certainly the week-after-week kindness, motivation and encouragement from the group that not only keeps me coming back, but that also keeps me writing.